Coming to the second quarter’s metal-wise detailed figures, silver production climbed 37% sequentially to 225,537 ounces in the quarter, while gold production surged 69% to 1,350 ounces. Copper production increased by 35% to 1.6 million pounds from the first quarter of this year. Mill throughput increased 6% to 118,224 tons.

ASM had earlier announced on May 2 that it has granted Endurance Gold Corp. the right to acquire an option to earn 100% ownership of the former Minto Gold Mine, Olympic and Kelvin gold prospects. This is in sync with the company’s strategic plans to become an intermediate producer in Mexico.

Some Peer Performances in Q2

reported silver production of 3.6 million ounces in the second quarter of 2022, up 10% on a sequential basis, primarily driven by solid performance at the Lucky Friday mine that surpassed the 1 million ounce mark. Apart from Lucky Friday, the company’s other two operating mines — Casa Berardi and Greens Creek — delivered solid performances as well.

HL’s gold production in the second quarter was up 10% to 45,718 ounces compared with the first quarter of 2022, aided by improved performance at the Casa Berardi mine.

recently announced that it produced 2.1 million silver equivalent ounces in the second quarter of 2022, which was 7% higher year on year. Consolidated silver production was up 27% year over year to 1,359,207 ounces, courtesy of higher silver production at the Guanacevi mine.

Endeavour Silver’s production for the six months period ended Jun 30, 2022, came in ahead of the anticipated amount at 4.1 million silver equivalent ounces on the back of higher ore grades at Guanacevi, which continues to exceed expectations for both silver and gold. Backed by this outperformance, EXK anticipates surpassing its guidance of 6.7-7.6 million silver equivalent ounces for the year.

reported silver production of 1,652,895 ounces in the second quarter of 2022, reflecting a 13% drop from last year’s quarter. This was due to a 9% decline in head grade at the San Jose mine, which was in line with the Mineral Reserve average grade for the second quarter. FSM’s silver’s gold output soared 100% year on year to 62,171 ounces, driven by higher contributions from the Lindero and Yaramoko mines. Gold-equivalent ounces (GEOs) were 96,712 in the quarter. 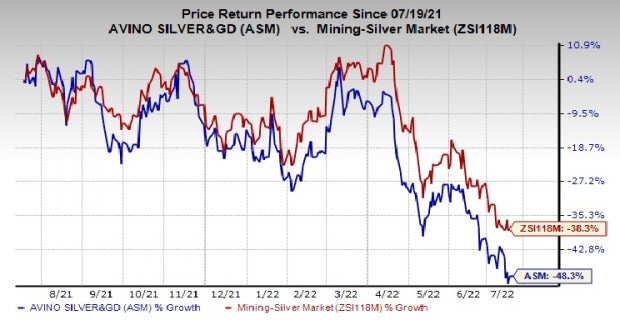 Shares of Avino Silver have fallen 48.3% over the past year compared with the

It’s a little-known chemical company that’s up 65% over last year, yet still dirt cheap. With unrelenting demand, soaring 2022 earnings estimates, and $1.5 billion for repurchasing shares, retail investors could jump in at any time.

This company could rival or surpass other recent Zacks’ Stocks Set to Double like Boston Beer Company which shot up +143.0% in little more than 9 months and NVIDIA which boomed +175.9% in one year.