industry for substantial gains in the second half of this year. Building on this bullish narrative, there is significant upside in upstream firms like

. With an all-round improvement in efficiency and cost structure, these companies should experience impressive revenue and cash flow growth.

The Zacks Oil and Gas – US E&P industry consists of companies primarily based in the domestic market, focused on the exploration and production (E&P) of oil and natural gas. These firms find hydrocarbon reservoirs, drill oil and gas wells, and produce and sell these materials to be refined later into products such as gasoline, fuel oil, distillate, etc. The economics of oil and gas supply and demand is the fundamental driver of this industry. In particular, a producer’s cash flow is primarily determined by the realized commodity prices. In fact, all E&P companies’ results are vulnerable to historically volatile prices in the energy markets. A change in realizations affects their returns and causes them to alter their production growth rates. The E&P operators are also exposed to exploration risks where drilling results are comparatively uncertain.


Over the past few months, the price of oil has generally traded above $100 a barrel amid Russia’s launch of military operations in Ukraine. The spike reflected concerns about oil supplies from Russia, which is one of the world’s largest producers of the commodity. As it is, crude prices were already gaining strength prior to the attack because of a demand uptick owing to the reopening of economies and a rebound in activity. The situation is particularly complex on the natural gas front, with Russia being the world’s largest producer of the fuel. Significantly, some 70% of Russian natural gas supplies are purchased by European countries that have no option to substitute a major part of it. The worldwide uncertainty imposed by Kremlin’s aggression briefly pushed U.S. natural gas prices past the $9 mark to its highest levels in nearly 14 years. In other words, macro as well as geopolitical tailwinds have driven most of the bullish sentiments in the energy market in years and the E&P companies should greatly benefit for obvious reasons.


Unlike previous occasions, this time, the U.S. shale operators have been reluctant to turn the tap on production despite the rise in oil realizations. Most of them were forced to dial back output in response to the COVID-induced decimation in demand and prices. Generally, the shale patch constituents are quick to pick up drilling activities on any steep rise in the price, which may thwart the fuel’s bull run. Yet, this time, the companies seem to be in no hurry to boost output. Finally, learning their lesson, shale operators are focusing primarily on improving cost and increasing free cash flow rather than looking at boosting production. While oil at $90 is profitable for almost all shale entities, the industry, for its part, is sticking to the mantra of capital discipline and sustainable production. According to the weekly data provided by Houston-based Baker Hughes, the last time that WTI crude traded at these levels, some 1,600 oil rigs were operational. Now, it’s just around 600, which is proof of the wariness on the part of the producers to raise output too quickly.


The energy companies have changed their approach to spending capital. Over the past few years, producers have worked tirelessly to cut costs to a bare minimum and look for innovative ways to churn out more oil and gas. And they managed to do just that by improving drilling techniques and extracting favorable terms from the beleaguered service providers. Moreover, driven by operational efficiencies, most E&P operators have been able to reduce unit costs, while the coronavirus-induced collapse in crude forced them to adopt a more disciplined approach to spending capital. These actions might restrict short-term production but are expected to preserve cash flow, support balance sheet strength, and help the companies to eventually emerge stronger. In particular, despite continued inflation and supply chain challenges, cash from operations is on a sustainable path as revenues improve and companies slash capital expenditures from the pre-pandemic levels amid sharply higher commodity prices.


The sharp increase in crude prices has allowed the upstream operators to deliver a solid financial performance. Cash from operations looks sustainable as revenues improve and companies cut capital expenditures from the pre-pandemic levels amid sharply higher commodity realizations. To put it simply, the environment of strong prices has helped the E&P firms to generate significant “excess cash,” which they intend to use to boost investor returns. In fact, energy companies are increasingly allocating their rising cash pile by way of dividends and buybacks to pacify the long-suffering shareholders.

The Zacks Oil and Gas – US E&P industry is a 41-stock group within the broader Zacks Oil – Energy sector. The industry currently carries a Zacks Industry Rank #27, which places it in the top 11% of more than 250 Zacks industries.

, which is basically the average of the Zacks Rank of all the member stocks, indicates fairly strong near-term prospects. Our research shows that the top 50% of the Zacks-ranked industries outperforms the bottom 50% by a factor of more than 2 to 1.

The industry’s position in the top 50% of the Zacks-ranked industries is a result of a positive earnings outlook for the constituent companies in aggregate. Looking at the aggregate earnings estimate revisions, it appears that analysts are highly optimistic about this group’s earnings growth potential. While the industry’s earnings estimates for 2022 have surged 167.5% in the past year, the same for 2023 have risen 162.8% over the same timeframe.

Considering the encouraging dynamics of the industry, we will present a few stocks that you may want to consider for your portfolio. But it’s worth taking a look at the industry’s shareholder returns and the current valuation first.

The Zacks Oil and Gas – US E&P industry has fared better than the broader Zacks Oil – Energy Sector as well as the Zacks S&P 500 composite over the past year.

Since oil and gas companies are debt-laden, it makes sense to value them based on the EV/EBITDA (Enterprise Value/ Earnings before Interest Tax Depreciation and Amortization) ratio. This is because the valuation metric takes into account not just equity but also the level of debt. For capital-intensive companies, EV/EBITDA is a better valuation metric because it is not influenced by changing capital structures and ignores the effect of noncash expenses.

On the basis of the trailing 12-month enterprise value-to EBITDA (EV/EBITDA), the industry is currently trading at 5.56X, significantly lower than the S&P 500’s 12.19X. It is, however, well above the sector’s trailing-12-month EV/EBITDA of 3.80X.

An oil producer targeting Midland Basin of west Texas and the Eagle Ford trend of south Texas., ESTE focuses on growth through a combination of acquisitions and active drilling. The company’s impressive acreage position in the top basins provides it with some 13 years of high-quality inventory life. With a reinvestment rate of just 50%, Earthstone is able to create robust free cash generation. 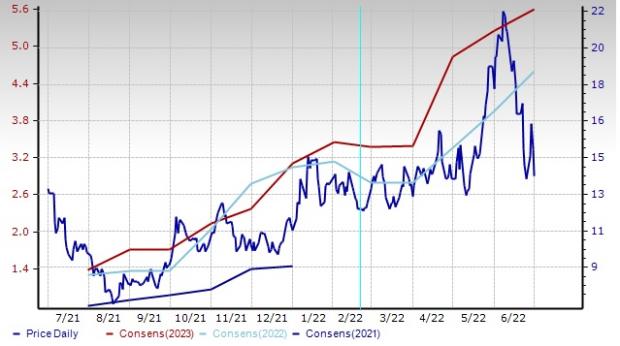 Range Resources has extensive oil and gas resources in key regions like Marcellus Shale & North Louisiana. The company is ideally positioned to reap benefits in the long term from its projects in the Appalachian Basin. As most of its production comprises natural gas, RRC is well-positioned to capitalize on the mounting clean energy demand.

Sporting a Zacks Rank of 1, the 2022 Zacks Consensus Estimate for RRC indicates 130.2% earnings per share growth over 2021. Range Resources’ shares have gained approximately 51.8% in a year. 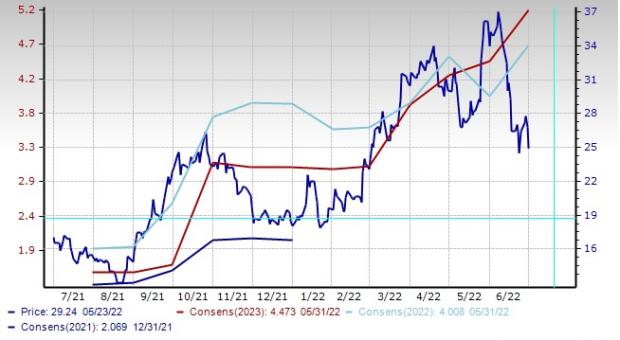 Matador Resources’ operations are mainly concentrated in the Delaware Basin, which is among the country’s most prolific oil and gas plays. Since 2011, the company significantly boosted its Delaware acreage, which now covers 124,800 net acres. Moreover, it identified up to 4,381 gross potential drilling locations on its Delaware Basin acreage, making its production outlook bright. Based on MTDR’s strong dividend growth story, it makes for an attractive offering.

The 2022 Zacks Consensus Estimate for MTDR indicates 158.1% earnings per share growth over 2021. The company currently carries a Zacks Rank #1. Meanwhile, Matador Resources has seen its shares gain 26.9% in a year. 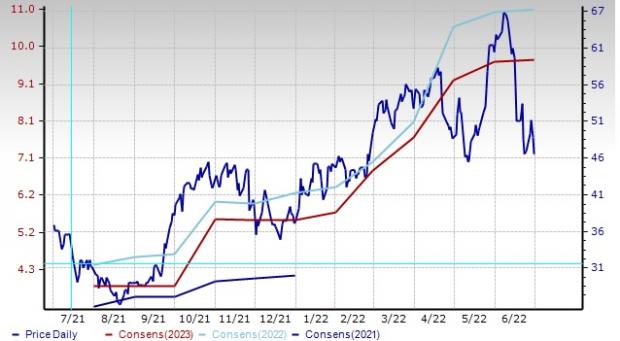 Antero Resources has positioned itself among the fast-growing natural gas producers in the United States. The company’s strategic acreage position in the low-risk and long reserve-life properties of the Appalachian Basin is a major positive. Cashing in on high commodity prices, AR expects to generate more than $2.5 billion of free cash flow in 2022.

The 2022 Zacks Consensus Estimate for Antero Resources indicates 413.9% earnings per share growth over 2021. Antero Resources currently carries a Zacks Rank #1. Meanwhile, the hydrocarbon producer has seen its shares increase around 103.6% in a year. 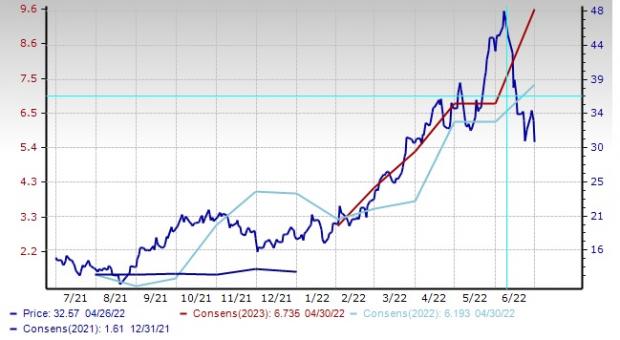 Devon is an independent energy company whose oil and gas operations are mainly concentrated in the onshore areas of North America, primarily in the United States. The upstream operator’s cost management, divestiture of Canadian assets, and completion of the Barnett Shale gas assets sale will allow it to focus on its holdings in four high-quality, oil-rich U.S. basins. DVN’s innovative dividend policy should also attract investors and position it for more upside in the near-to-medium term. 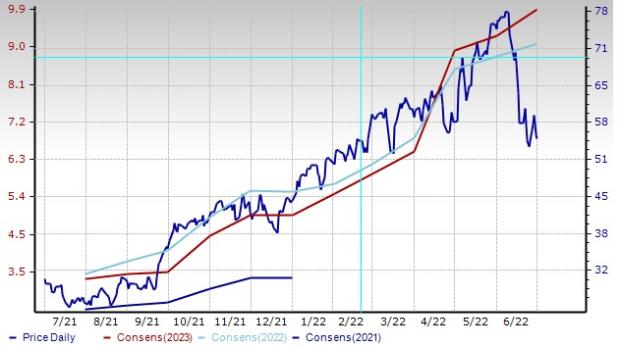 It’s a little-known chemical company that’s up 65% over last year, yet still dirt cheap. With unrelenting demand, soaring 2022 earnings estimates, and $1.5 billion for repurchasing shares, retail investors could jump in at any time.

This company could rival or surpass other recent Zacks’ Stocks Set to Double like Boston Beer Company which shot up +143.0% in little more than 9 months and NVIDIA which boomed +175.9% in one year.